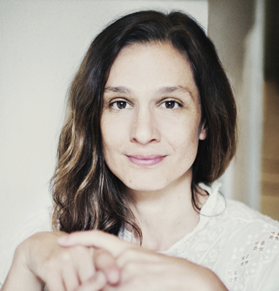 Getting Unstuck: The Body as a Tool against Writer's Block

As Somatic and yoga practitioners, we spend all this time exploring the experience of the body and movement. Though many of us feel the potential creativity in these practices, direct applications often remain in the realm of functional or creative movement practices, like dance or vocal performance.

But how can we truly bridge this inquiry into the body and movement to other forms of expression, specifically imagination, language, and writing?

Join Madelyn Kent, MFA, and former faculty of NYU/Tisch School of the Arts, to learn about her journey as a writer as she found her way back to the body. How her childhood experiences of neurological conditions (and neuroplastic healing) led her to deep experiments in the creative process as a playwright and director. How her frustration as a teacher at not being able to help writing students on a foundational level with blocks and anxiety led her to seek more sustainable practices. And how her continuing studies of Somatics and the Feldenkrais Method® opened up these inquiries into a formal and highly-specific study of the overlaps between the creative process and the way the nervous system learns and grows.

Madelyn’s plays have been presented in theaters in Europe and New York, including Soho Rep, where she is a founding member of the Obie Award winning Writer/Director Lab. After over 10 years of teaching writing, the limitations of available methods of teaching creative writing became impossible to ignore. The standard approaches seemed to overlook deeper issues of anxiety and blocks, and in some cases, reinforced them. Already deeply immersed in various physical approaches to creativity, she realized the crucial role physicality played in the realm of expression and imagination.

In 2008, Madelyn left New York and her teaching position and moved to Tel Aviv to study Feldenkrais® Somatic Education. Upon returning to New York, she combined her expertise in Somatic Education, teaching, and writing to develop Sense Writing, which she has taught in workshops to over 1,000 people in 8 countries. She has helped students—from award-winning filmmakers and journalists to people who have never written before—find trust and joy in their creativity and build a resilient writing practice.