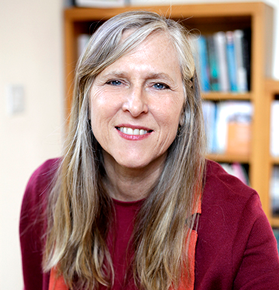 Dynamism, Survival and Finesse: Martial Arts and the Feldenkrais Method®

One can think of martial arts practice, especially unarmed encounters, as applied physics in action. Increasing skill in the practice of traditional martial arts means working with more finesse and less effort, in order to generate (or diffuse) power. Moshe Feldenkrais melded his knowledge of engineering, physics and the martial art of judo to create the Feldenkrais Method® as we know it today. He realized that the same principles that enable a judo practicant to throw someone twice his or her size across the room could be applied to improving the varied actions of everyday life. In this Feldenkrais Awareness Summit discussion, we will follow this line from the martial arts to their expression at the very heart of the practice of the Feldenkrais Method.

Elizabeth Beringer has been involved with the practice and development of the Feldenkrais Method for more than 40 years. She trained directly with the founder of the Method, Dr. Moshe Feldenkrais, in both the U.S. and Israel.

Elizabeth has maintained an ongoing and varied private practice, applying the Feldenkrais® approach with a diverse population, including those with severe movement limitations, seniors, musicians, children and those in chronic pain. She has also worked extensively with athletes, martial artists and dancers and is known for her ability to apply the Method in dynamic situations.

Elizabeth has practiced the martial art of aikido since 1977 and currently holds the rank of 6th-degree black belt. Aikido is a nonviolent martial art centered on neutralizing aggression by redirecting an opponent’s force. For many years, she was an instructor at San Diego Aikikai in San Diego. Her practice of Feldenkrais has been deeply informed by her experiences in Aikido.

Over the years, Elizabeth has been actively involved with the development of the Feldenkrais Method into a respected profession: founding and editing for 18 years the first Feldenkrais Journal; developing educational programs and materials; working with the practitioner organization, the Feldenkrais Guild of North America®, in numerous capacities; and teaching postgraduate seminars for Feldenkrais practitioners in many locations around the world. Elizabeth also served as the editor for Moshe Feldenrkais’ books Embodied Wisdom and the recently reissued Higher Judo. Elizabeth co-founded Feldenkrais Resources in 1983 to develop and disseminate Feldenkrais-based educational programs that can be done at home. Since then, Feldenkrais Resources has reached interested groups in nearly every country, and continues to actively develop new applications of the Feldenkrais Method to meet expanding interest worldwide.

Currently Elizabeth is mainly involved in the training of new practitioners. She travels extensively teaching postgraduate programs and leading trainings for new teachers in Europe and the US. Elizabeth lives in San Diego with her husband, Rafael Nunez, a professor of cognitive science at the University California San Diego, and their teenage daughter.